So you’ve been told that getting an SSD can boost your Macbook performance, and you’re thinking about doing so? But, is it really worth it to upgrade your MacBook Air or Pro to an SSD?

In this article, I’ll share a few of my own opinions.

SSD is short for Solid-state drive. In case you are new to the SSD world, check out the wiki for more information.

The common misconception about SSD

There are a lot of debates over HDDs vs SSDs in the past several years. Bill from EMC outlined the top three misconceptions about solid-state drive. The article was written in 2014. According to him, the common misconception was that SSDs are unreliable.

That is not true. According to PCMag’s explanation of difference between SSD and HDD, SSDs win HDDs on durability because

…an SSD has no moving parts, so it is more likely to keep your data safe in the event you drop your laptop bag or your system is shaken about by an earthquake while it’s operating…

Bill also mentioned that SSDs were expensive than HDDs, which was and still is true. But, earlier this year Lucas Mearian posted an article in PCWorld stating that SSD prices are coming close to HDDs. Here’s a graph you’ll find interesting. 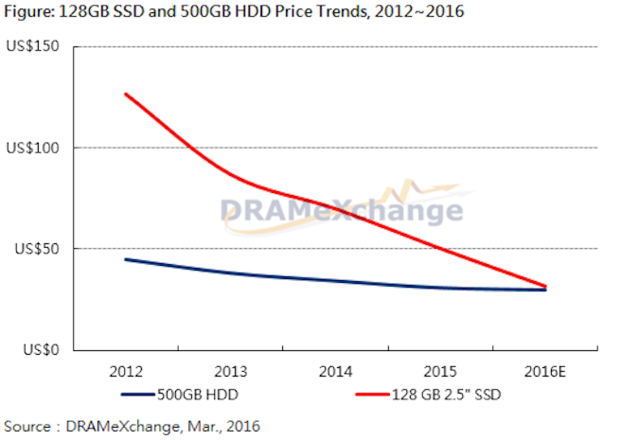 Is it worth upgrading your Macbook to SSD?

In my opinion, it depends on your goal, and more important, the current situation of your Mac.

If your MacBook is a couple of years old and runs really slow to a point that affects your productivity (in particular, assuming you use it to do work most of the time), then you should consider replacing the internal hard drive with an SSD. Typical models include 2009, 2010, 2011, 2012.

If your MacBook is relatively new and it works okay to deal with most errands. Then I’d not recommend you to upgrade even if it has performance issues. Because you can resume some speed by unloading some apps, cleaning out unnecessary files, etc.

Be careful when choosing an SSD for your Mac

It’s common perception that a product receives good reviews and customer feedback, it must be good. But what if I told you that’s not exactly true?

What do I mean? Take a look at this SSD shadiness: “Kingston and PNY caught bait-and-switching cheaper components after good reviews”.

Seriously, I was shocked by the news reported by Joel Hruska from ExtremeTech (thanks Joel! I always have full respect to courageous journalists). I don’t know how dare these established tech companies?tossed out business ethics.

Anyway, the takeaway to you is watch out for those SSD brands and manufactures that had bad reputation. It’s always safe to read reviews from different sources and compare what users had to say about their using experience.

How to install an SSD to your MacBook?

You don’t have to be super tech-savvy to do this. In fact, there are tons of great video tutorials out there to help you out. iFixit, for example, is one of my favorites. For MacBook Pros, this guide has detailed a 4-step instructions.

A general rule you should follow is to make backups before you proceed. This is very important and should always be kept in mind. Set up Time Machine, or have a solid online backup mechanism in place.

Hope you find these tips useful. Now I’d like to hear from you. What’s the life looking life for an SSD-based MacBook? Or any other reasons that are holding you back from upgrading?