Yesterday a reader left a question for me. It’s related to iPhoto. Well, I’ve to admit that I’m using Photos (yes, the upgraded version of iPhoto). Anyhow?

“Hi Tysa, I upgraded my old MacBook Pro to the OS 10.11 El Capitan, and now the iPhoto app won’t open. It says the version of iPhoto installed on my Mac is not compatible with the current OS X. And it asks me to download the latest version for free from the Mac App Store. I’m not sure what I should do. I don’t want to lose any precious photos. Please help.”

Well, as far as I can recall. I faced similar problem while I was upgrading OS X Mavericks to Yosemite. The iPhoto app wouldn’t open, and it was resolved after download the new Photos app. Yes, according to Apple official announcement, starting with OS X Yosemite v10.10.3, every Mac now includes the Photos app.

I had no problem upgrading iPhoto to Photos app, and all my pictures were 100% kept intact there (thank God, had I known it would cause photo loss, I would have hesitated). So, I’d assume it’s safe to do so. But, just in case it’s best to backup all your pictures before proceeding.

How to upgrade iPhoto to Photos and migrate all pictures

Matt Elliott from CNET has contributed an excellent guide on how to move your photos and videos from iPhoto to the new Photos app, the details about iCloud Photo Library, how to optimize storage, and what you can do with your old iPhoto library.

Also, iDB has shot a great YouTube video which explains pretty much the same thing. If you are under Wi-Fi, watch it.

In the meanwhile, many users reported that the new Photos app is less intuitive, and it took time to get acquainted with using new software. If so, you can continue to use iPhoto but it has some restrictions on the versions you can use, and you have to reinstall the iPhoto app.

How to reinstall iPhoto app on Mac El Capitan

If you are not a fan of the new Photos app, Ross McKillop from SimpleHelp has a step-by-step guide that shows you how to re-install iPhoto on OS X El Capitan. Initially, the guide was written for OS X Yosemite, he later updated the post and claimed it works on OS X 10.11 as well. 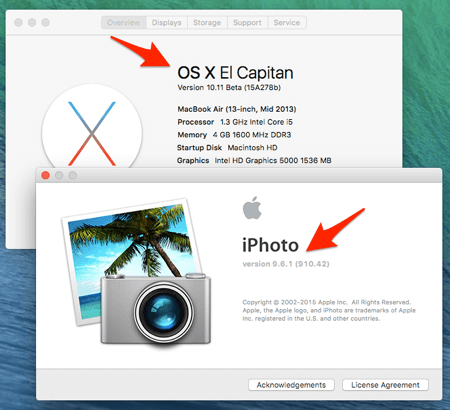 No matter which way you go for, you shouldn’t have any problems opening iPhoto (or Photos).

One last tip: do make regular backups of your precious pictures.

One thought on “iPhoto Won’t Open? Here’s How to Fix it (You Have 2 Options)”