Let’s be?honest, are you really a fan of Siri?

Although Apple has put lots of efforts to make Siri?an intelligent personal assistant, I’m just not as enthusiastic as I should be told to.

Don’t get me wrong, I have used Siri many times on my phone and Mac as well – yes, I am a typical example of “the 98% have used Siri, but only 3% do so in public due to embarrassment [poll]”, a survey from 9to5mac.

I also participated the survey, and honestly the result was surprising!

So, if you are like me who want to disable Siri on macOS Sierra, here’s a quick guide for you. I have no idea why Apple decided to incorporate it into Sierra, maybe because El Capitan users made strongly request this feature. For me, I am used to not using Siri as my personal assistant when I’m working on my MacBook Pro.

Here’s where Siri shows up on Mac’s menu bar

To turn it off, you just need a couple of steps:

Step 3: In the new windows, uncheck “Enable Siri”. That’s it. 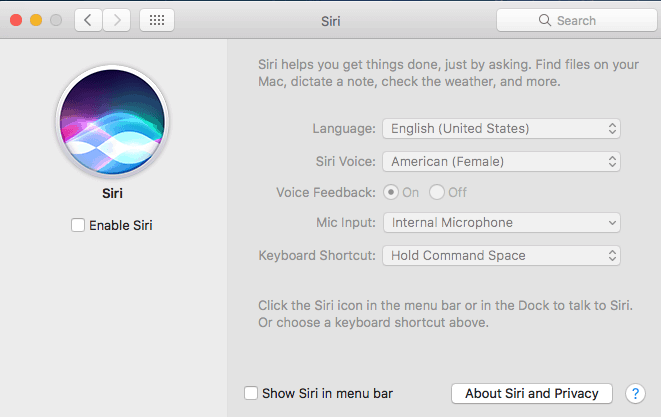 You should notice the siri icon disappear from the menu bar right away.

In case you need the feature at some point, go to the same window and select “Enable Siri”. A pop-up “Siri sends information like your voice input, contacts, and location to Apple to process your requests.” will show and just click to confirm it.